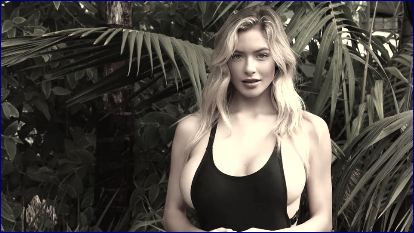 Who is Hannah C Palmer?

Hannah Palmer is a model and social media star best known for posting bikini-clad photos on her ‘Instagram’ page, which has thousands of followers. After competing in Maxim’s ‘Cover Girl Contest,’ she began to dominate the spotlight.

Even though she was not chosen as the magazine’s cover girl, her participation helped her become well-known. As a result, she gained popularity on social media and began receiving modelling offers from well-known brands.

Palmer has modelled for a variety of brands, including ‘KO’ watches and ‘Bang Energy,’ as well as for well-known photographers such as Raul Gomez and Larisa Elaine. Hannah Palmer wants to own beauty business.

She would also like to assist homeless women by collaborating with organisations that work to improve the lives of women and girls all over the world.

Hannah Palmer enjoys travelling and has visited many popular vacation spots across the United States. She also enjoys going to places like ‘Disneyland’ and attending events like ‘Coachella Valley Music and Arts Festival.’

Aside from travelling, she spends her free time at the gym, as she is a fitness enthusiast. Palmer hopes to help homeless women in the future by collaborating with non-profit organisations.

She now resides in the United States, where she continues to model for well-known brands and photographers.

Hannah Cozette Palmer was born in the United States on May 18, 1998. She grew up in Arizona and went to ‘Prescott High School.’ She attended the ‘University of Arizona’ after graduating.

She also attended the ‘Penrose Academy’ beauty school in Phoenix, Arizona, where she fell in love with the modelling and fashion industries.

She began her modelling career by posting photos of herself on social media platforms such as ‘Instagram.’

When her photos drew a lot of attention, she was encouraged to try out for one of the most popular men’s magazines, ‘Maxim.’

She then decided to enter the ‘Maxim’ magazine’s ‘Cover Girl Contest.’ She came in 34th place in the competition. Her participation in the competition raised her profile. She was then signed by companies like ‘KO’ watches,’ ‘Bang Energy,’ and ‘Manscaped.’

She also began posing for well-known photographers like Larisa Elaine and Milian Eyes. Palmer’s amazing modelling abilities and looks earned her opportunities to work with world-renowned fashion brands such as ‘Fashion Nova.’

Hannah Palmer’s social-media career took off after she began collaborating with well-known photographers and fashion brands.

Her ‘Instagram’ account, which is filled with bikini-clad photos, currently has over 700,000 followers. The majority of her photos receive thousands of “likes” and hundreds of comments.

Models and artists can use the service to provide exclusive services to their subscribers. Hannah Palmer’s ‘Patreon’ page offers a variety of subscription options ranging from $5 to $100 per month.

Palmer is also involved with the popular photography mobile app ‘VSCO,’ which allows users to capture photos and edit them with a variety of editing tools.

Palmer aspires to be one of the most well-known models in the United States. She would also like to start her fashion and beauty business.

Hannah Palmer has an approximate net worth of $2 million from her modelling career.