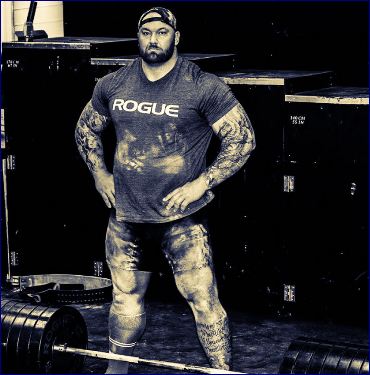 Hafthor Julius Bjornsson is a famous actor and professional strongman. He is the 2018 World’s Strongest Man, the winner of the Arnold Strongman Classic in 2018 and 2019, a multiple world record holder, and arguably the strongest man ever.

For five seasons, he portrayed Gregor “The Mountain” Clegane in the HBO series Game of Thrones. He was also a professional basketball player in the past.

He returned to FSA Selfoss for the 2007–2008 season. He averaged 6.7 points per game, helping the team gain promotion to the urvalsdeild, but a troublesome ankle forced him to retire from basketball at the age of 20.

In 2008, Haftor met Icelandic strongman Magnus Ver Magnusson at his gym “Jakabol,” and Magnus said Haftor appeared to be a good prospect as a strongman.

In 2010, Haftor won several strongman competitions in Iceland, including Strongest Man in Iceland, Westfjords Viking, and five of six events at the OK Badur Strongman Championships.

Haftor deadlifted 501 kilogrammes (1,105 lb) under strongman rules at his gym in Iceland on May 2, 2020, while being referred by Magnus Ver Magnusson. ESPN broadcasted live coverage of this accomplishment. Haftor broke Eddie Hall’s strongman deadlift record of 500 kilogrammes (1,102 lb) set in 2016.

Haftor won the 2018 World’s Strongest Man title, making him the first Icelander to do so since Magnus Ver Magnusson in 1996.

After successfully defending his title, Haftor became only the second person after Zydrunas Savickas to win three Arnold Strongman Classics in a row (2018, 2019 and 2020).

In August 2013, Haftor was cast as Ser Gregor “The Mountain” Clegane in the fourth season of HBO’s Game of Thrones. This was his first major acting role, and he is the third person to play the character, following Conan Stevens in season 1 and Ian Whyte in season 2.

With his appearances in seasons four through eight, he became the first actor to portray Clegane in more than one continuous season. Haftor was cast in the 2017 film Kickboxer: Retaliation as Mongkut.

During the Philadelphia Renaissance Faire’s inaugural season in 2015, Haftor played the lead role. He appeared as “King Thor,” the leader of a Viking raiding party attempting to take Amman.

Hafthor and his ex-girlfriend Thelma Bjork Steinmann have a daughter. Once Hafór had said in an interview published by Mulligan Brothers on December 21, 2019, that he had not seen his daughter for 3 years.

Then, He was in a relationship with Andrea Sif Jonsdottir, whom he met at a gym, until early 2017. They shared a home in Reykjavik.

Hafthor had been dating Kelsey Henson, a Canadian waitress, since late 2017. When Hafthor was in Alberta, Canada for a strongman competition, he stopped by the bar where Henson worked. The couple drew attention due to the disparity in their heights, with Henson standing at 157 cm (5 ft 2 in).

On October 21, 2018, Hafthor announced his marriage to Henson. Hafthor and Henson welcomed their first child together, a baby boy named Stormur Magni Haforsson, on September 26, 2020.

Hafthor is a brand ambassador for SodaStream, a company that manufactures a device that allows you to make carbonated water at home. He has appeared in brand advertisements promoting environmental awareness, including one with fellow Game of Thrones actor Hannah Waddingham (who played Septa Unella).

Hafthor is also a brand ambassador for The Beard Struggle, a company that makes men’s beard care products.

Hafthor has several tattoos, some of which are related to Norse deities and Viking culture. On his calf, he also has a tattoo of Jon Pall Sigmarsson.