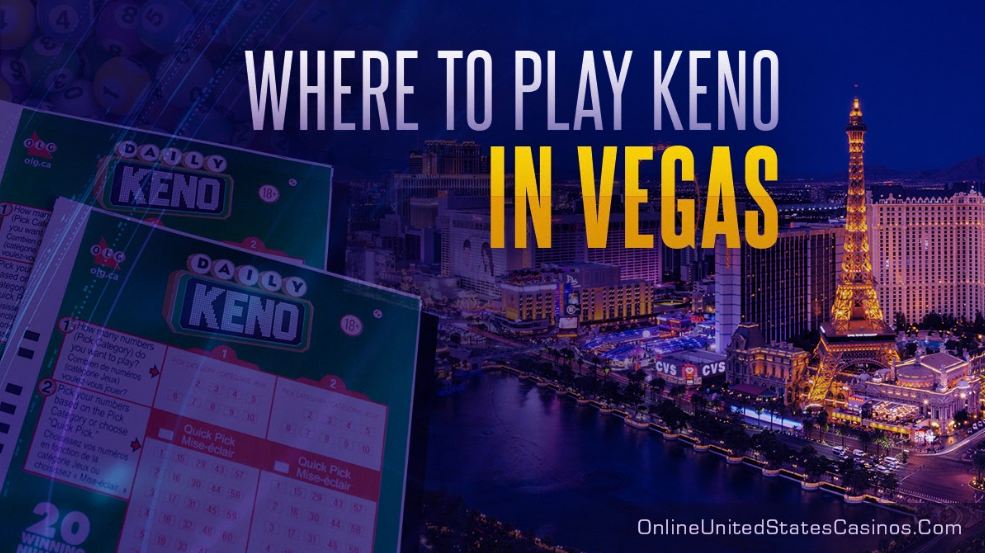 Nevada has 466 casinos, most of which can get found in its most populous city, the world’s former gambling capital, Las Vegas. Naturally, Sin City’s gaming floors most get associated with traditional table games and slot machines. However, those that have visited them on more than one occasion know that they are also home to lottery-style betting options. When it comes to this gambling genre, keno is king.

Keno is a game where players mark numbers on a card from an offered selection of one to eighty. Then they wait on a ball machine, identical to that used in bingo, to pick twenty balls. Depending on how many correspond to those on their card, they win a prize outlined in a paytable. Despite its high house edge, most people enjoy playing this game because of its simplicity and the fact that it does not warrant their immediate attention. Thus, loads of Vegas establishments offer it, and we break down the top five best keno games below provided in the world’s entertainment capital. Those that are unwilling to visit Nevada to enjoy such lottery-style gaming fun can play at keno sites from anywhere at any time.

Formerly known as the Fitzgeralds, located in the downtown area at 301 Fremont Street, the D, is our first listing because it features the world’s most massive keno board, which went up on its façade in February 2017. It broadcasts live games from the venue’s second-story keno lounge. The D has a luck-of-the-Irish theme, which it got following a substantial renovation in 2012. The gaming floor here sprawls 42,000 square feet, featuring 3:2 blackjack tables, craps with x10 odds, hundreds of slot machines, and a Circa Sports sportsbook. On-premises dining options include the Andiamo Steakhouse, the D Grill, and the American Coney Island restaurant.

Also Read  how to get clash of clans on windows phone

The Plaza is another downtown casino found at 1 Main Street. It underwent a substantial renovation in 2010, which entirely changed the appearance of the establishment’s casino lobby and floor. The latter is 80,000 square feet and is home to over five hundred gambling machines and twenty gaming tables. Keno draws here, run every Monday to Wednesday, occurring at almost five-minute intervals. The Plaza offers Mega 10 Keno and MegaKeno, both of which have progressive jackpots in play that can payout wins in the millions. All Plaza keno players can monitor draws from TV sets placed at the venue’s many dining spots, like the Race & Sports Book Bar, the Fresh Mexican Grill, and the Omaha Lounge.

Originally the MGM Grand, this casino was the site of one of the worst high-rise fires in US history. It got bought out by Bally Manufacturing in 1986 and got renamed as Bally’s Las Vegas. It is right across its younger sister property, Paris Las Vegas, at 3645 South Las Vegas Boulevard. Live keno here happens Thursday to Monday, at different time slots each day of the week, with stakes ranging from $1 to $10. Those not into lotto-like action can enjoy over 1,200 slot machines spread out throughout Bally’s 67,000 square feet gaming floor and over sixty-five table games, plus fourteen poker ones. Bally’s legendary dining experience consists of Burger Brasserie, the Nosh Deli, and the infamous Bally’s Food Court.

Harrah’s Las Vegas is at the heart of the Strip at 3475 South Las Vegas Boulevard. It operated for decades as the Holiday Casino but now has a Carnival theme. Tourists can reach it via the city’s monorail system, which stops at the rear of the property. Harrah’s casino space stretches more than 80,000 square feet, with patrons enjoying over eighty gaming tables and 1,200 slots inside it. Harrah’s keno lounge offers daily action, with games airing at hotel channels 35 and 36. Hence, visitors can follow keno draws without even leaving their rooms. If they get hungry and feel the need to step out for a bite to eat, this resort offers multiple food spots with Ruth’s Chris Steakhouse, the Fulton Street Food Hall, and the Oyster Bar being top choices.

Located on 2411 West Sahara Avenue, near Chinatown, Palace Station originally opened its doors in 1976 as The Casino. Many consider it a local’s venue and an inexpensive alternative to locales in the resort corridor. However, that does not mean it falls behind top-end Vegas establishments in terms of gambling action. On the contrary. Palace Station has an 86,000 square foot casino floor that offers some of the best video poker machines in the city, and it possesses an old-school keno lounge. The venue has several quality eateries, with the Oyster Bar, the Brass Fork, and the Panda Express all getting rave reviews.

Shelly Schiff has been working in the gambling industry since 2009, mainly on the digital side of things, employed by OUSC. However, over her eleven-year career, Shelly has provided content for many other top interactive gaming websites. She knows all there is to know about slots and has in-depth knowledge of the most popular table games. Her golden retriever Garry occupies most of her leisure time. Though, when she can, she loves reading Jim Thompson-like crime novels.

The Indispensable Role of Social Platforms in Marketing