Android vs ios development deserves attention as it disturbs users all over the World. iOS smartphones are gadgets for people who choose the most optimized, well-thought-out devices and are willing to pay a fairly high price for these qualities. And smarts on Android are the choice for users who value maximum freedom from any templates more and choose a technique with flexible settings, as well as for those who are looking for good, but inexpensive gadgets.

This component in  both operating systems is largely the same. But on Android, making changes and installing overlays is not a problem. While on iOS, any changes are limited – they can be very surfaced, rather even cosmetic. And the user has to choose and use only pre-designed templates with a ready-made design. But here it is imperative to honestly note that both the design and the interface of the Apple OS are perfectly optimized and really very user-friendly. So that such restrictions in setting up the gadget do not cause any particular problems for the user.

Price and functionality of iOS and Android smartphones

The main difference between iOS and Android meringue smartphones is the price of the gadget. It’s no secret that any devices from Apple have a high price tag, which is why even the simplest apple models are not available to all users. But Android smartphones are produced by a wide variety of brands. Name affects the price of the device, is still not as large as in the case of iPhones. Yes, Samsung smartphones will, of course, cost more than, for example, Prestigio gadgets. But the difference in cost is still not as colossal as between apple and conventional technology. 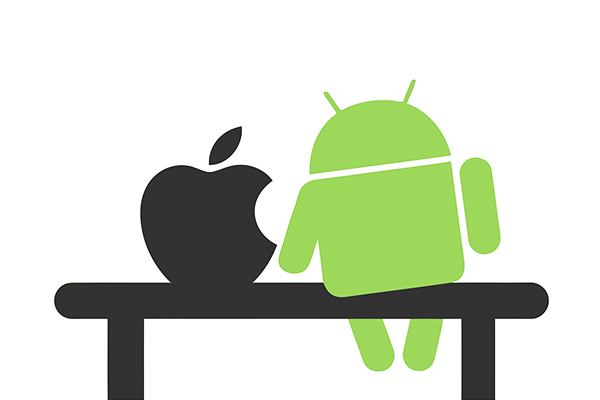 Apps for Gadgets on Android and iOS

Almost all the functionality of smartphones is provided by special applications. They are responsible for absolutely everything – from the camera to the navigator, from video and audio players to games. For some people smartphones running the Android operating system have a powerful advantage. Because the number of various applications on Google Play is simply amazing. Only here there are some nuances. Yes, the App Store has a slightly smaller selection of apps, but this is just not a drawback.

The whole point is that a crazy number of applications are created, uploaded, updated and changed on Google Play every day. Naturally, it is quite difficult to conduct thorough. Most importantly, timely checks of this software, to put it mildly. And this is used with pleasure by some dishonest developers, on industrial scale riveting content clogged with ads, spies and viruses. IOS apps are much more closely monitored and, therefore, the risk of downloading an inoperative or even malicious app is reduced to almost zero. And the number of applications for iPhones cannot be called small. Although there are slightly fewer progs available in the App Store than in the Google store, there are still more than two million. So you can easily choose high-quality software for a variety of tasks.

Since Apple branded smartphones are a premium product, their quality, performance and safety are strictly controlled by the brand. So the gadgets work almost flawlessly. Apart from, of course, some nuances with a certain decrease in the performance of the device when the battery is worn out, iPhones, even several years after purchase, can work as well as at the very beginning of use. They are stable and reliable.

But the main advantage of iOS is operating system updates. On iPhones, updates arrive more often. And changes are made more significant. In addition, the developers very quickly respond to any glitches and problems in the operation of gadgets, instantly eliminating any problems found. With Android, alas, it is impossible to optimize updates so quickly and well. If Apple repairs and makes OS updates only for one type of smartphone, then the developers of the Android system have to optimize each new update for many models of various brands. It is impossible to embrace immensity, and some glitches with each fresh update are still skipped.

Sat May 29 , 2021
Contents hide 1 Decreased Coverage 2 Short Videos will become even more Popular 3 Stories Permeate all Social Media 4 Cleaning Social Networks from Bots and Fakes 5 Emphasis on Personal Brand Development The world of social media marketing is constantly changing – functionality is being updated, new social networks and services appear. You should follow the trends to find out how to advertise on […]